Linda and I survived Level 2 by a mutual strategy- laughter. We left one independent study session in a beautiful private home in Laurel more con-fused about material than when we arrived! We reminisced too about whatever happened to the folks that were there that day? Apparently some were as baffled by the content as we were. However, somehow we both managed to get through all three levels in 2015.

The challenges of gardening in Montana were her motivation to enroll in the Master Gardeners’ course, that, and “meeting other skilled gardeners.” She transferred here to opt for adventure when her employer, the U.S. Post Office, gave her the option. And challenging it was, after growing up in the gardener’s dream state of North Carolina. Her heart still lingers in that beautiful state, as she immediately shares that her favorite tree is the Dogwood (Cornus florida) of North Carolina, whose bloom is the state flower. Incidentally, at least 12 species of dogwood trees and shrubs exist, with varying appearances.

Linda began gardening when helping her mom with flowers. She has taken that thread all the way to employment as a gardener at the Moss Mansion, plus maintaining a few large yards around Billings for Blake Nursery of Big Timber. The lineage did not come easily or quickly, though. She volunteered for almost a year at the Moss prior to being hired.

Consider some of the sage, professional advice from this veteran of the grounds, “You plant it and keep your fingers crossed.” Upon further inquiry, though, her approach is not really that cavalier. She finds that her skills with horses translate to caring for growing plants. “The discipline of consistent care” for both animals and landscaping undergirds her continued success. Linda’s a worker who does not take short cuts, hence her success.

She longs for the MG training in the future to involve more hands-on instruction. “I learn better from a person” (than a video), someone to demonstrate and to respond to immediate questions. I guiltily slump in my chair, since the onus of this improvement to our program logically falls to those who have completed all three levels. Can some of us procrastinate accepting responsibility for yet another year? Or can the program create an incentive enticing enough for experienced MGs to actually teach newcomers?

Her profound advice for new gardeners again inspires loud guffaws. “Take the Master Gardeners’ course.” Even after giving advice on how we do what we do, she’s a devotee. Her goals for the upcoming season include raised garden beds created with apple boxes. First she must add false floors to the boxes. Also she has enrolled in the Naturalist pro-gram offered at the Audubon Center, spurred on by her giggling buddy. I learned about it from former Naturalist attendees Ann Guthals and Ann McKean. Will you join us noisy gals in the back of the room? Let’s begin digging deeper.

The mission of the Yellowstone County Master Gardener Newsletter is to "educate and inform," not to advocate or persuade. The editors take no position endorsing or opposing, approving or disapproving, any of the assertions or arguments in the contributed information. Information submitted to the Newsletter is for your interest only. 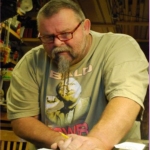